Once Lex and Leroy had a reputation and started making a name for themselves.  I soon realized that I would need more characters to round out the comics.  This would be in an effort to keep viewers interested, as well as give me a chance to experiment a bit.  This page will be dedicated to two of the characters I’ve created so far; our first female character – Linda, and the abrasive, egotistical personality of Levi

When I originally started to experiment with different characters, I knew I had to create something different.  Each character has a different identity and personality.  So, each new character I created would have to be as unique and self sustaining as Lex and Leroy have.  So the question became what should I personify in this character? The answer came easier than I thought.  Since I already had two male characters, how much more different can I get than creating a female character.  Of course, this proved to be more of a challenge than originally thought.  Having a female character meant creating a new body style to help distinguish between her and Lex and Leroy, as well as a new hair style.

My first attempts were a bit shaky.  I had gotten so used to drawing Leroy, that drawing anything else was a challenge to get right.  I toyed with high heels, makeup and eyelashes, to help characterize her.  However, just as I prefer in real life, simple was better.  So, after a few not so flattering attempts, Linda in her current form made it to the page.

Linda is the type of girl that you want to know more about.  She’s smart, sexy, and funny and couldn’t be more different from Lex and Leroy.  Even though I haven’t had as much time getting to know Linda as much as Leroy or Lex, she is a wonderful change of pace to the comic series.

Soon after Linda came into being, a multitude of different characters started to make their way into my sketches.  Each of them represented a different type of person, but only a few proved to interesting enough to draw again.  One such character is Levi. 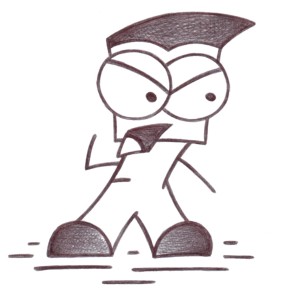 Levi is a straight laced, clean cut, alpha male type of character.  He is always proving how much stronger or tougher he is compared to the other characters in the comics.  This gives an abrasive personality and often gets him cast as the drill sergeant when the other doodles need to get back into shape.

Levi is one of those characters you love to see fall of his high horse, and many times he does.  He may be the angry type of doodle, but he is always able to help someone out when they are in need.

Between Linda and Levi, Lex and Leroy, and my other characters, I’m having a tough time keeping all my different personalities in order.  However, each adds something different to the comic series.  For that I am thankful.  My name is Kurtis the Red, and this has been about Linda and Levi…

(Let no one stand in your way, if you allow others to block the path to your goals…you deserve to fail)